I’d travelled all day into the wilderness of Queensland, to a little town named Dingo, and an hour more, deep into the Naomi Cattle Station, where I was due to stay overnight on a cot in the barn before my next mini adventure. Backpacking around Australia was one of the most exhilarating and scary things I have ever done. I mean, the country contains nine out of ten of the most deadly snakes, most of the world’s meanest spiders, man-eating sharks and crocodiles, stinging jelly fish, not to mention baby-snatching dingos and boxing kangaroos! The country is teeming with dangerous stuff, and here was I about to embrace camping out in the bush on a three day horse trek. Was I completely mad?

As we mounted up in the morning, I had to admit that this part of the world was stunningly beautiful. And hot, very hot. Our party of six amateur horse-riders and a guide headed out into  the bush, whilst a dilapidated ute took our sleeping bags, swags (a kind of hardy canvas cover with an integral sleeping mat) and cooking equipment on ahead to a prearranged meeting point with a corral for the horses. The day was lovely. What a beautiful way to see the countryside in all its glory. We had time to explore and see everything, stopping where we liked to admire the view, whilst letting the horses do the legwork. 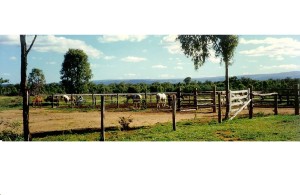 The trouble came that evening as we dismounted to eat, and then to sleep. Suddenly we were at ground level with all the critters and creepy crawlies, not six feet up on a horse. The reality hit. I was going to have to lie on the ground, all night, with the scorpions and spiders and snakes and…I was terrified! My fellow backpackers were terrified. And somehow it ended up that I was on the end of a line of cowardly tourists lying on the ground, exposed to the elements.

We talked and laughed nervously for a while, but one by one we fell silent and dozed off, or in my case lay there silently, scared out of my wits. I started to hear the cacophony of the bush. And, boy, was it noisy. The moos of plaintive cows in the distance gave the impression we’d be trampled to death if everything else didn’t get us first. Every rustle caused me to fear for an approaching snake or scorpian. Each buzzing mosquito made me twitch and flick. Every hoot of an owl made me start. The calls of the crickets deafened. Bats swooshed past. And noises that I’d never heard before…I could only imagine what manner of creature they belonged to! The bush at night is an incredibly lively place and I felt like I was dinner and they were closing in for the feast. There was no way I could escape, all I wanted to do was get up and go home. My heart was beating rapidly and I was sweating in my swag, but there was no way I could open it up – what if something crawled in to join me? I was beginning to panic.

I opened my eyes wide to the dark night. I was straining to hear every sound as I peered up into the starlit sky. I noticed that the stars were really bright. Millions of little jewels sparkling. Free of the light pollution of the cities, they were awe inspiring. Still, I listened. I started to recognise each sound individually. Not that I knew what made the sound, but I singled it out from the crowd. Listening to each. Hearing its rhythm, its pitch, its melody, and its variations. As soon as I had distinguished it fully, I moved onto the next. Studying without judging. The rhythm of my heart beat slowed and my breathing eased.

Having singled the noises out over an eternity, I brought them back together to form the symphony of the night. I heard nature’s orchestra come together in that moment that was forever but only now. Panic was gone, all fear was dissipated, time had disappeared, there was only music and I was part of it.

I awoke early the next morning, un-molested and refreshed. The memory of that night I was totally immersed in the moment, taking in only what my senses perceived, not judging, not thinking, stays with me. Extreme peace, I called it. Later I learned others call it Mindfulness and Meditation, being in the now. What an eternity a moment is when you fully immerse yourself! A beautiful, peaceful, fully conscious, awesome experience. Just goes to show, you needn’t be sitting cross-legged in front of a Buddha statue and candles to experience the bliss and calm serenity of meditation.

Come find out more at an evening talk on Mindfulness and Meditation.  See the events page for details or email now catalyst@nicwalker.com or call now on 07989 404112.