The power to change the world

Have you ever believed that life is unfair? That the system in which you live and work is failing you in some way? And that there is nothing you can do to change it however much you want to make a difference? That you don’t have the power to change the world?

So many of my friends post comments on social media highlighting prejudice against people, and moan about media witch-hunts and corporate wrong-doings. The corruption of politics and feeling of powerlessness is often a topic of heated discussion whenever I go to courses or meet friends.

I keenly felt an absence of power when I worked in a government department. I could see so many areas for potential change for the better, to make things run more smoothly, to save money, to improve the service we offered. I used to change things within my sphere of control, but suggestions to my bosses about larger scale improvements were met with messages of ‘don’t rock the boat’, and one manager even told me that I had the vision of a vastly more senior position, but that I better knuckle down as that was inappropriate to my grade. Needless to say, I worked within the system for a number of years, with mounting frustration at the vast waste of money and talent, before resigning for my own sanity. 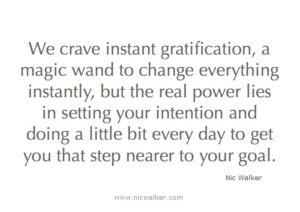 The feeling that we don’t matter, and individually have little or no value to add to this world, is becoming normal. My meditation group is full of people who care, but need to de-stress and feel in control of something in their lives, their thoughts.

Thoughts are energy. You can measure brain activity with electroencephalograms (EEG). You can measure heart activity with electrocardiograms (ECG). An MRI scanner picks up the magnetic fields and radio waves in your body to produce detailed images. X-rays, at high energy and short wave-length, produce images of inside your body, by passing through and being absorbed to varying degrees by different materials at differing frequencies. At it’s simplest level, if you peer down a microscope to view the atoms of which you are made, you can see little electrons whizzing about. It would be fair to say that you are an energetic being.

The world is made up of the same atoms as we are. The same electrons. The same energy, just vibrating at different frequencies. So, it got me wondering, can I affect the world around me with my energy, and can the world affect me?

The Institute of HeartMath in America is experimenting with that very same question in their Global Coherence Initiative. They monitor changes in the earth’s magnetic field and collective human emotions and have started to find some interesting data.

I know sometimes ‘the world’ definitely affects my mood. I was out walking with the dog the other day, and it was really windy. I felt the energy of an approaching storm and was exhilarated. When I got home, I found out we were about to experience the tail end of a hurricane. Some people say they can sense earthquakes coming. Others, that they can sense the electromagnetic eruptions of solar flares, which certainly do affect radio waves here on earth, disrupting television transmissions and computer networks. There has even been some speculation and research that solar flare activity could be linked to tensions around the world, such as the 2010 ‘Arab Spring’. With hindsight, it may be easy to see the link between social unrest and electromagnetic changes in the earth.

But, back to my original point – do I have the power to change things? I was inspired today by a teenager who saw a sandbar in a river in India and wished for a forest. Every year the river would flood and, because there was no real protection, wash away more agricultural land. Thirty years later, as a grown man, he has his forest. Everyday, he paddled out to the sandbar and planted seeds and cuttings. He persevered and now there is a jungle, with tigers and rhinos and birds and insects. He did that. He took the power, used his energy, and day by day got on with fulfilling his vision in what seemed to be an insurmountable task.

We crave instant gratification, a magic wand to change everything instantly, but the real power lies in setting your intention and doing a little bit every day to get you that step nearer to your goal.

One man took his dissatisfaction with the EU and turned it into a national referendum, with a ‘Brexit’ now on the cards. Another created a jungle. Whatever it is you want, the power is within you. Perhaps anything is possible if you don’t give up at the first, or even second, setback. Keep steering a course towards your heart’s desire, whether that be changing bureaucratic systems for the better or keeping the countryside green. The amount of energy you expend, and keep on spending, will make a difference. It all builds up over time. You have the power. You can change the world. And if you don’t take action, you might just be swept along in the wake of someone else’s energy instead!

THE POWER TO CHANGE THE WORLD: