INEXTRICABLY BOUND – WHAT YOU DO MAKES AN IMPACT

I was standing in the dark on the deck of an ancient tall ship, a small one, but a tall one nevertheless. I had been at sea for about two months, working my passage from Madeira bound for Scotland via the Azores. This was our longest passage – eight days without sight of land. The weather had been variable although it was early summer, but this night was calm. Not a cloud hid the sliver of moon, nor the gazillion stars twinkling above. The brilliant marine phosphorescence in the ocean echoed the bejewelled sky. I was grateful to be on the midnight to six a.m. watch this awe inspiring night. I had never seen beauty like it, and I stopped still to drink it in. All six of us on watch that night were quiet, mesmerised by the ethereal sight. In the dark you could not see where the sea met the sky, and it seemed as if we were floating amongst stars.

As I was standing there, swaying in the slight swell, in nature’s very own spectacular light show, I suddenly became aware that my feet were planted in the deck and growing along its wooden planks. The strange sensation continued and grew as I realised that I was part of the deck and indeed, part of the ship. The weird feeling expanded further as I became aware that I, as the ship, was also part of the ocean, and suddenly I could feel the cold sandy depths and the warmer currents moving through me. As I ‘realised’ that I was also the ocean, I suddenly ‘felt’ the shores, and gathering speed, I ballooned into the world. I could simultaneously see, feel and hear everything, from the tiny ship on my midriff, to mines and mountains, winds and waters, cities and deserts, people and plants. I was just floating through space uniquely aware of every single thing on the Earth all at once. It was all me!

As I suddenly thought about what was happening and how amazing it was, I shrank, like Alice in Wonderland, back to my normal size, five foot six me, standing on the deck of a beautiful old creaky boat in the middle of an enormous ocean.

After a while, puzzling over what had just happened, I talked to another of the crew. Feeling faintly ridiculous, I told him what had happened, and asked if he thought I was going crazy. He smiled. ‘No, you’re not going crazy, Nic. You’ve just been at sea long enough to get it.’ he replied cryptically. ‘You are lucky!’ 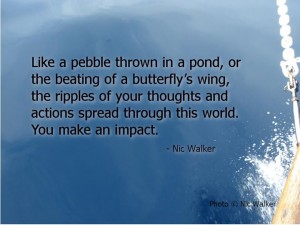 What an amazing and bizarre moment. I had never experienced anything like it before. But, the feeling, the certain knowledge that we are all inextricably bound together, that what we do affects everything else, remains. Like a pebble thrown in a pond, or the beating of a butterfly’s wing, the ripples of our thoughts and actions spread through this world. We make an impact.

INEXTRICABLY BOUND – WHAT YOU DO MAKES AN IMPACT: