ADDICTION – A DISCONNECTION FROM LOVE?

What is addiction? When you abuse substances or are addicted to something, whether it be alcohol, smoking, food, drugs, sex, or gambling, what does that mean and how does it come about? And most of all – what can you do about it? Here we explore whether it is a disconnection from love, and how to heal past trauma for an addiction-free present.

Most people with an addiction don’t even have to see a bottle of vodka or catch the scent of a newly baked cake to want to quaff it down. Doing addiction is a process that starts with a feeling – I want it; I need it; I have to have it. They feel that whatever it is is irresistible; they feel compelled to do it. But by what are you compelled? On closer inspection, there is something before the desire phase. People are compelled to relieve themselves from pain, to forget who they think they are and what they have experienced in the past, to feel in control. Look at the language we used to describe addictive activities – ‘get out of your head’, ‘drink to forget’, smokers ‘need a cigarette to calm down’, ‘don’t have to think for a while’, ‘forget your troubles’, ‘fills an empty space inside’, ‘escape from reality’, ‘it’s something to lean on’…

What an individual is actually trying to do is alter their internal feelings and thinking by external means. They don’t like what they think and feel. If they identify too much with their thoughts and feelings, they may come to the conclusion, perhaps subconsciously, that they don’t like themselves, and have adopted the addictive behaviour to circumvent the pain.

Often the addictive pattern stems from a traumatic incident from which they couldn’t escape. This literally imprints on the brain, resulting in behaviour, such as anxiety, withdrawal or social phobia, that cuts individuals off from making or keeping loving human connections. Alternatively, instead of being loved unconditionally as a child, and thereby loving themselves, individuals learn, erroneously, that they are not worthy of love, that they are not good enough to be loved or included in a happy, social life. This may not be a conscious lesson, but becomes an underlying belief that underpins later dysfunctional behaviour. Forms of Attachment Disorder, as psychologists have described it, have been associated with trouble relating to others, low self-esteem, and substance abuse. 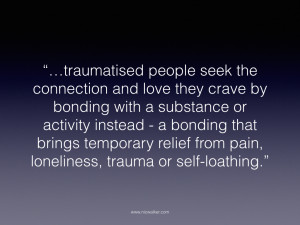 The addictive behaviours also fulfil a secondary objective of punishing themselves for being unworthy – they result in harm to health or well-being, and the behaviours further disconnect them from others. This serves to re-inforce the original faulty thinking that they are unloveable. It is not difficult to conclude that traumatised people seek the connection and love they crave by bonding with a substance or activity instead – a bonding that brings temporary relief from pain, loneliness, trauma or self-loathing.

Early research into addiction saw rats, isolated in small cages, hooked up to a tube which injected them with doses of heroin or cocaine if they pressed a lever. Rapidly the rats injected themselves more and more, until they died from an overdose. This led to the widely accepted theory that the drugs themselves were irresistible and would cause people to become addicts if they succumbed even once. Later research offered rats a choice. The Rat Park experiments by Professor Bruce Alexander, allowed rats to socialise and gave them a stimulating, interesting environment in which to live and play. In this context, the rats rarely chose to take the drugs. It led Professor Alexander to look at what would happen to humans if their social connections were severed. Whilst it is not ethical to actually conduct such experiments on human beings, he found plenty of evidence from history in the form of colonisation. Local tribes and communities that had their culture and social connections destroyed, had encountered similar problems afterwards with abuse of alcohol and other available mind-altering substances. A study was also done on US soldiers who were known to have used to heroin during their time at war in Vietnam. It found that on returning to ‘normal’ life, these men were unlikely to use heroin regularly again. As the Professor said, “the drug only becomes irresistible when the opportunity for normal social existence is destroyed”.

Nicotine in tobacco is also cited as being addictive. It is thought nicotine is addictive because it activates the reward mechanisms in the brain, but a person has to keep smoking in order to keep those pleasure-inducing dopamine levels high. Similar internal processes occur with sugary foods. However, a well balanced diet, good gut flora, meditation and exercise are also known to boost dopamine production. So why, these days, would a person smoke, knowing it could kill them, instead. Perhaps it goes back to the need to belong and to be loved – maybe they fall in with the ‘wrong crowd’, or in the absence of loving connection they bond with the wrong, possibly harmful but available, thing.

Children that get love freely and unconditionally from those around them are less likely to grow up with self-destructive behaviours and addictions. I love Jack Kornfield’s story of the Babemba Tribe from South Africa. When someone in the tribe has done wrong, they believe it is because that person has forgotten who they really are, and so the whole tribe comes together to surround that person and remind them of all the good things that they have ever done. They reconnect lovingly with the miscreant who in turn reconnects with their true self.

When it comes down to it, maybe we are all ‘addicted’ to love – a reliable, compassionate and unconditional affection from others and for ourself. We crave a connection that transcends, regardless of circumstances or behaviour. Healing trauma, correcting faulty thinking and surrounding yourself with loving friends, family and a caring community is what is required for a happy, addiction-free life. That’s what we’re all seeking. As the song goes, love really is all you need.

The past doesn’t have to control your present. You can heal trauma and pain and rediscover self love with EFT Tapping, Havening®, and Hypnosis. NLP helps you change your thinking. Practising Mindfulness can release you from past/future-centred thinking and centre on what is really happening now. Meditation will help you reconnect with your true self, your creativity and boost your dopamine levels. Coaching will help improve your personal interaction skills and build a supportive environment and relationships. These techniques are all successful in helping people to combat addictions. I recommend taking medical advice from your doctor about any potential substance withdrawal problems before contacting me if you would like some help.

ADDICTION – A DISCONNECTION FROM LOVE?: