WHILST I WAS LOVING LIVING LIFE, LOVE FOUND ME

I was thirty-nine, single and tired of it. I wanted a man. I wanted a partner for life. A husband! I had never wanted that before. A boyfriend, yes, but never a husband. Something had changed, and it wasn’t my biological clock. Having children had never been a particular desire of mine. But I was tired of dating unsuitable men. Trouble was, I had a job that I loved and took me travelling all over the country three or four days a week meeting new people all the time. I was never around long enough to meet a suitable man, let alone form a loving bond. But it was time!

I decided to figure out what it was I really wanted. I wanted a man, yes, but what kind of man? I had never really thought about it before. I’d been a bit of an opportunist in that I’d really only gone out with guys who’d asked me, which was a bit of a pot luck approach considering I was a successful business woman with a psychology degree. It was time for a different strategy.

So what kind of man did I want? I sat down one weekend and gave the question some serious thought. Then I wrote it down. By Sunday evening I had come up with a list of things I wanted: tall, talented, interested in people and the mind, funny, musical, loving, worships the ground I walk on, committed, no baggage, financially stable…the list lengthened. I deleted the ‘don’t wants’ and turned them into positive attributes where I could. Once I had it, I prioritised it, crossing out some characteristics, adding others and being more specific about what each point meant to me. The next weekend, I took out my list and read it through: if I had a man like this, could I envision he and I living the rest of our days happily together? Would we fit compared to what I thought of my own characteristics? Would I be prepared to stop travelling so much in my work and stay in one place more? Could I love someone enough to settle down with them? On finding the answer was yes to all these questions, I simplified my list. Once I agreed that I could see it working, I was ready to take action. But what action? Where would I find a man like this? I hadn’t a clue.

Although I’m not religious, it was time for a leap of faith. I lit a candle, sat down cross-legged in front of it, and took a deep breath. “Dear God, Allah, Buddha, the Universe, the Universal Unconscious, Quantum Field and anything else I haven’t mentioned,” I started, determined not to leave anything out, “I want a husband.” I read out my list and committed myself to finding said man within six months. Then I took another deep breath and relaxed, blew out the candle and laughed my socks off. “Let’s see,” I challenged grinning broadly, “let’s see what happens.”

I started to seek and get work closer to home. Work was fun, and I found many spin offs into social activities, classes and courses that I entered into and enjoyed immensely now I was more locally based. After all if you’re looking for a partner who is into the same stuff as you, you’ve got to get out there and do it. I’d forgotten all about my list since I’d handed it into the lap of the gods, I was flying high! I found that once I’d let go of the constant scanning for a suitable mate, that life was just more fun. As a result, I met a whole load of new people. If you want a different result, you’ve got to try a new strategy!
On one residential course, I met a guy who liked to dress up in women’s clothes, although he wasn’t at that particular moment! Normally it would have made me run a mile, but he was nice, funny, and so we went out the next week. I met another lovely man, an entrepreneur who was starting up an Asian cookery business. I even started asking people out for drinks myself. Then I ran into an old acquaintance at a seminar. We got talking and went for a lively drink afterwards with some
of the others. We met up again at the next workshop and went for a drink on our own. We got on like a house on fire, and as we parted that night I kissed him goodbye lightly on the lips. How very daring of me! And completely out of character. We met again. The following week I took two days off and booked a room with a large balcony and a sea view in his home town. As nervous as anything, I met him for dinner…and six weeks later he proposed. All those people who said you’ll just know when it’s right, were right. I accepted.

It was at that point I remembered my vow and my list. I found my journal and looked to see what I had written. There it was, the date, almost exactly six months had passed, and the list could have been written about this lovely man, even the bit about ‘no bag 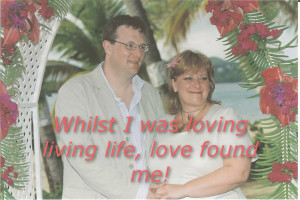 gage’, which I’d had to cross out because it was negative and I couldn’t think how to make it more positive! My beloved does have ‘baggage’! But the rest, as they say, is history. We are still living happily together over a decade later. Bags, after all, do have handles!

Whether this was God, Allah, Buddha or the Universe answering my prayers, or the positive focus of my energy, I know not, but I did use a different strategy to get a different result. I thought about what I really wanted, whether that fitted me and the life I wanted to live. I made a personal commitment. I was specific, with a measurable outcome and a time frame. I took congruent action, leaving myself open to opportunities and possibilities, and I let go of my attachment to the result. Whilst I was loving living life, love found me.

Need a coach to help you sort out what’s important in your life? Contact me now by email at catalyst@nicwalker.com or call 07989 404112.

WHILST I WAS LOVING LIVING LIFE, LOVE FOUND ME: