I was talking with someone just the other day. He was an entrepreneur with several lucrative businesses, and a succession of companies that he’d started and sold on for millions. He was just about to start another. Man, was he excited about it – he was going all in! Different from the industry he was used to working in, yet he was totally focused and convinced he was doing the right thing. He had a pretty good track record and I asked him what made him think he was going to succeed in this venture. 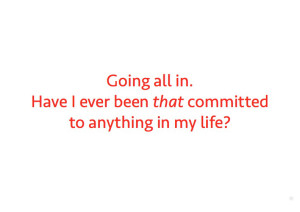 He looked me full in the eye and said “It’s not about success, though I’m sure it will be, it’s about fulfilment. It feels right for me.” His total commitment to his project was obvious and radiated out of him like a beacon. Right there and then I wondered, have I ever been that committed to anything in my life?

I searched back through my memories, riding the wave of his intense feeling of commitment, to see if I could match it. It wasn’t until I got back to my driving test when I was seventeen, that I could feel anything like a match to his burning certainty. I had to learn to drive and pass my test, it was the only way I could get the hell out of Dodge, so to speak – to have my freedom. That seventeen year old desire to leave school at the end of the year and explore the big wide world. Had I really not wanted anything, not committed to anything in such an all-consuming way since then?

It really got me thinking. I did passably well at college. I had a reasonable career at work before leaving to set up my moderately successful business…and there, I believe, lay the crux of the matter. No. I had never gone all in. I had never risked everything on something I felt was right. I had never, until this moment, lived anything but a medium kind of life work-wise.

The next question from this not-quite-so-brave-big-wide-world-explorer was obvious. If I did go for it, what would it be?

The answer was, as it usually is, right in front of me. I’m fascinated by the power of the human mind. I’ve been doing so much research into energy systems, epi-genetics, psychological well-being and physical health, that I’m positively bursting with information. I’m passionate about finding the way to weave it all together into pragmatic action that people can take, that I can take, to make their lives better. It’s about time I shared that in the ways that I am good at – talking about it and writing about it.

I want to feel that seventeen year old’s passion once again. I want to feel the fear and do it anyway, as Susan Jeffers had reminded me I could all those years ago. I want to seize the day, and not just regretfully file the meeting with my entrepreneur friend as one of those ‘I wish I could do that’ moments. I am taking the steps. Putting the work in to put my work out there in the big wide world. I’m going all in!

UPDATE – I  now run public talks and events about happiness and wellbeing and started writing A Book For A Change. It was published in 2017 and is now selling on Amazon world-wide!

Come find out more at one of my events and prepare to be amazed.