FEAR AND STRESS – FUD AND FOMO

There seems to be a lot of fear about. Recently, I’ve learned two new terms: FUD meaning Fear, Uncertainty and Doubt; and FOMO meaning Fear Of Missing Out. It seems as if our lives are being inundated by fear.

What if you join this protest march, will you be filmed and your name be put on some dissident register? What if you use this email provider or social network, won’t all your private information be collected and used to spam you or copy your identity and steal from you? What if this legislation is passed, couldn’t that be used to snoop on you or imprison you in the future? What will happen if you don’t save enough for your retirement? What if global warming is speeding up? What if? What if?

And how many times have you been out with friends and one of them has constantly been texting or looking at a social network site for information about what their friends are up to, or worse still, takes a social call in the middle of a conversation? Are they having a better time than you?

Or maybe you splashed out on something you can’t really afford because you just must have the latest gadget, smart phone, television or fashion. Maybe you have managed to justify it to yourself as a need for your business or role or status even though it was a purchase based on fear of missing out or being judged. It makes me laugh out loud at just how much we give into these fears.

Fear is defined as an unpleasant, often strong emotion, caused by anticipation or awareness of danger. There are two key words here – danger and anticipation. It would be hard to make an argument that not checking your social media feed was dangerous to you, or even that stealing all your money in online fraud amounted to actual physical danger. The second word is even more important – anticipation i.e. based in the future. The event on which the fear is founded has not happened but it could, it might – it doesn’t even mean it definitely will.

Fear is imagined. Therefore, it is not real it only feels real. Your imagination causes you to produce the chemicals and send signals to your body that make your heart race and your stomach clench as you ready yourself to fight or flee! Of course, if you are about to get run over by a bus, you need that adrenaline and cortisol to get you out of there fast, but you don’t need them if it’s a general fear about the way the world is going or a fear that you’re not keeping up with the Joneses. So, you spend money to keep up appearances, or look at your phone to check that there’s not a better party somewhere else, or worry about what could happen, and the body’s chemicals don’t get used for their designed purpose. Over time, this sort of stress response can build up and make you ill. According to Dr Bruce Lipton, cell biologist and author of ‘Biology of Belief’ (2008 Hay House), you have two main mechanisms operating in your body that help you to survive and keep on going. One set enables the function of growth, to build and renew cells; the other set helps stimulate you so you can survive danger. Unfortunately for us, you can’t effectively regenerate and repair cells at the same time as running away – they are virtually mutually exclusive. So while you are living in fear you are not creating a healthy immune system and repairing cell damage, in effect, you are causing your body to deteriorate.

It reminds me of a story: a psychologist asks her class how heavy a glass of water is. Answers come back – only a few grams. She asks how easy it is to hold the glass of water in her hand with her arm outstretched. Easy – it’s only a few grams after all. She asks the group how easy it would be to hold out for a minute – no problem. An hour? Not too bad, maybe. A day? A week? Can you imagine how heavy that would feel on your arm after you had been holding it a while? It would be like torture. Your arm would ache to put it down. Your mind would beg to release it.

It’s the same with fear and stress. Living with them on a daily basis over a long period of time will have a cumulative negative impact on your health. Studies have shown that long term exposure to stress hormones such as adrenaline and cortisol can suppress your immune system*. Almost every major illness has been linked to chronic stress. Being inundated with messages about things to fear all of the time means we become stressed, so much so we’ve invented new terms, like FUD and FOMO, to describe them. So, how should we deal with it?

My plan is simple. Firstly, cut out the major fear/stress spreaders – in effect resist watching and reading so much national and international news, and watch less TV generally. Work out what affects daily life on a local and immediate level and start dealing with that as a priority. Get back to basics! Work out what is within your sphere of control – things that you have to deal with on a daily basis. What can you influence, if not control, to make the way you live as easy as possible?

Secondly, spend time with the people you really care about. Make ‘social networking’ personal. Telephone real friends and make an effort to see them face-to-face. Get together more regularly. Show an interest in the people you really love, and stop trawling through endless reams of news of people you barely know who possibly exaggerate the fantastic, amazing time they are having! I made a decision not to have a smart phone, and limit my online social networking so that I can keep in contact with those who live far away, but have time to actually see friends. Have a laugh with real people, as laughing produces happy chemicals like endorphins and seratonin, which not only make you feel good now, but can boost your immune system.

Thirdly, the mind can benefit from daily quiet. According to Dawson Church  “Meditation has been shown to lower blood pressure, improve resting heart rate, reduce the incidence of strokes, heart disease and cancer, diminish chronic pain, and ameliorate anxiety and depression, and have a beneficial effect on many other diseases.”** Scientist and organic chemist Dr David Hamilton, says that meditation has been found to increase levels of the hormone DHEA (dehydroepiandrosterone), which helps minimize stress and improve memory. He cites an experiment that found that men who meditated had 23% more DHEA than their peers who didn’t, and women had 47% more than theirs. For each 20% increase in DHEA there was a 48% drop in heart disease and you were more than a third less likely to die of any cause!*** After reading that, I adjusted my alarm clock, and do about thirty minutes meditation every morning.

Lastly, eat and drink well and take a little exercise in the open air every day. In the UK, we’re bombarded with information about what, and what not, to eat. Who can forget that we’re supposed to eat five portions of fruit or vegetables a day, not imbibe more than 14/21 units of alcohol a week, and limit our salt and sugar intake? Without wishing to contradict any of the real nutritional experts, of which I am definitely not one, I have started to listen to the messages coming from my body! Occasionally, I have a ‘need for green’ – so I go with it and prepare more green foods, broccoli, leaves or whatever. Sometimes garlic calls! I eat only vegetarian and mostly organic. I try to avoid as many chemicals and genetically modified organisms as possible. I drink water with a slice of lemon, oh, and copious amounts of red wine! I heard that up to a litre a day is good for you heart. Maybe not your liver though! Everything in moderation, with a large dash of common sense! 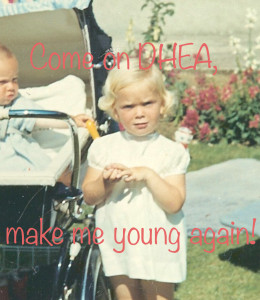 So, away with FUD, FOMO and the stress chemicals of fear, I’m going to save them for when a sabre tooth tiger comes calling. Come on DHEA – make me young again!

Mindfulness and Meditation evening talk see events page for details, or book one of my Stress Awareness or Stress Relief events for your organisation. Free 5 Minute Meditation and other guided meditations on the resources page.

FEAR AND STRESS – FUD AND FOMO: